Z Davis Robison and his wife, Mary, tried and failed for eight months to buy a house near their shop in Old Town Lafayette, before literally stumbling on the one they snapped up in January.

"The time for thinking about what your needs are is before you start looking," said the Oklahoma transplant. "Whenever you see something, you have to be ready to pounce in this market." 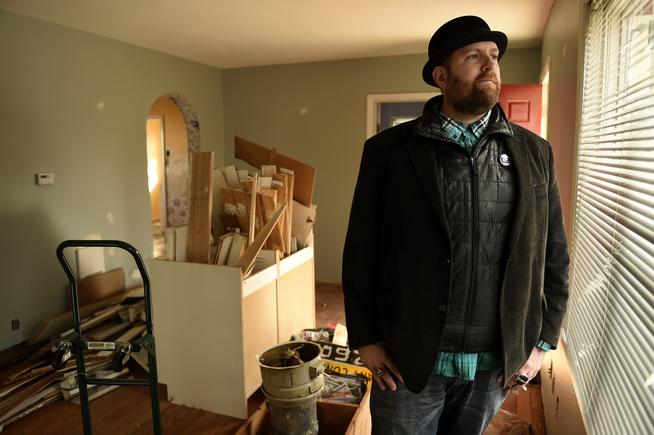 Mary was driving from their shop, Curating the Cool, and saw the landlord of a neighboring rental had just posted a "For Sale By Owner" sign. Z raced across the street to look at the place. The owner was still there, and Robison wrote a $5,000 check on the spot to seal the deal.

Just when the supply of homes available for sale in metro Denver seemed like it couldn't possibly go any lower, it has gone lower — a lot lower.

Metro Denver's inventory of homes for sale busted through new lows in December and January and could do it again in February, and that has left buyers frenzied, even desperate.

After slipping below 5,000 in December, the number of homes available for sale stood at only 4,171 at the end of January, according to the Denver Metro Association of Realtors, or DMAR, which uses a wider 11-county definition of the metro area.

Anthony Rael, chairman of the market trends committee at DMAR, estimates that new listings per month could double and they would all be snapped up.

"We are in uncharted territory," Rael said. "It is a head scratcher for all of us." 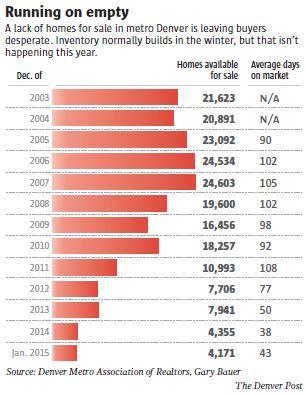 Buyers and their agents are increasingly bypassing the multiple listing service and turning to social media and networking to find properties. Rael said he has seen as many as 25 percent of sales now occurring outside traditional channels.

Buyers also are being forced into riskier actions, like skipping contingencies or not requesting repairs.

"You better pick and chose what you are going to ask for," Rael said.

They are bidding way above the list price and agreeing to bring extra cash to cover any gap if the appraisal comes up short. And if they have enough cash, they are throwing it down to push out buyers who need to borrow.

Above all, the shortage is contributing to a deep sense of frustration, especially for those wanting homes priced under $300,000.

Jocelyn Chardon said she never imagined the struggles she and her husband Jordan would face when they started searching for their first home in December.

"A house we looked at had 96 showings in two days — it was unreal," Jocelyn said. "When we put one offer down, there were 18 already in place. It is like a war out there."

The young couple toured about 20 properties in north Thornton and wrote offers on four that stood out, only to lose every time, either to cash buyers or those willing to way overbid the list price.

"We see more houses going up for sale, but I just roll my eyes because I know it will be a waste of time," Jocelyn said.

The couple will stay in her parent's home, where they moved a year ago to save up on the down payment, and pursue a saner search.

Another way to measure the tightness in a market is the time it would take to sell all available listings at the current pace of sales. A balanced market should have about six months of supply, according to the National Association of Realtors.

In metro Denver, that number is running closer to six weeks versus a national average closer to 20 weeks, according to the National Association of Realtors. For homes in the $200,000 to $299,999 range, supply is only about two to three weeks.

The flip side of sellers moving their homes so quickly is that many buyers are spending weeks and months searching.

Rael said one client looked at 94 listings over 11 months before landing a home. Moye said she had a client who pulled out all the stops, offering above list price, writing impressive letters to sellers and even delivering them cookies. After 10 failed offers, she resigned herself to renting.

"She couldn't handle it anymore, the ups and downs," Moye said. "She just lost speed. It was awful."

A few things could relieve the pressure on the market. Interest rates could spike higher, like they did in 2013, sidelining buyers and causing the inventory to rise.

Home prices and rents could rise so much that people view Denver as too expensive and stop moving here. Or builders could shift their focus from higher-priced properties to entry-level homes, bringing needed inventory.

But failing that, hopes are fading that a massive wave of sellers will somehow appear and provide relief to anxious buyers.

"There is no indication that there will be an abundance of listings," Rael said. "The next 30 to 60 days will be really telling as to what kind of year we will have."