Like many US cities, Denver is changing—and quickly. As more people move to the city, the demand both for homes and for new businesses means that the face of the city is becoming something different. That difference is reflected not just in our changing lifestyles, but also in the new neighborhood names that pop up from time to time. The newest part of the city to receive its nickname is SoBo, which designates part of the area below South Broadway. This part of Denver has so much to offer, and there’s much more to come.

First There was LoDo, then RiNo and LoHi—now There’s SoBo!

Many of Denver’s up-and-coming neighborhoods have been given new nicknames in recent years. Most of these new names are based on the location of the neighborhood, or the streets that define its boundaries. Not everyone is a fan of the nicknames, but there’s no question about the popularity of the neighborhoods themselves. Like SoBo, each of these areas has its own distinct character, and is experiencing a refreshing revival that is helping to revitalize the whole city!

LoDo: This neighborhood has a special distinction among the crowd, as it was the first one to receive a nickname that really caught on. It’s named for the lower downtown area near Union Station, and it’s a name that’s been around since the 1980s! Officially this district is the Lower Downtown Historic District, but for the last 30 years or so, it’s been known simply as LoDo.

RiNo: The River North Art District is home to a fabulous collection of new businesses, and has rapidly become an immensely popular neighborhood as a result. New restaurants, food markets, art galleries, and artisan retailers, have revitalized the neighborhood and its new reputation as a chic place to eat, shop, and enjoy local culture is well-deserved.

LoHi: The Lower Highlands is another of Denver’s hot new neighborhoods. With an intriguing combination of both old and new homes and commercial buildings, LoHi is also home to some fantastic bars and restaurants. In fact, it’s well-known as one of the best places in town for unusual and innovative food, since the number of restaurants and bars in this neighborhood has tripled in the last 10 years!

SoBo: The newest addition to the collection, SoBo’s nickname is derived from its location south of Broadway. New wining, dining, and entertainment venues, along with Antique Row and the newly-dubbed Green Mile, make this hip, trendy, and eclectic neighborhood the next big thing to hit Denver.

What’s Driving the Development of these New Urban Gems?

Denver is home to some amazing neighborhoods, many with a long and storied history, and with the kind of architecture you’d expect to accompany those stories! Denver is also home to many neighborhoods that are changing dramatically, largely due to changes the city itself is undergoing.

Denver is a fast-growing city, and in fact, during most of this century it’s been one of the fastest-growing cities in the whole country. In particular, the growth of downtown Denver, and of the city’s overall population, has been particularly rapid.

That rapid population growth is a big driver of the changes that have been happening in the city in the last decade or two. With all of these new people living, working, and traveling in the city, it’s inevitable that the downtown area would expand,. Just as inevitable is the fact that the neighborhoods right next to the downtown core would be the first ones affected by all of this growth. However, while we’ve had some new commercial construction going on downtown, as well as some renovation of older buildings, the core downtown area is pretty much static. This is because for the most part, it’s already as built up as it’s going to get. As a result, there’s not much room for new construction in this part of the city—so that means the only option is for downtown to expand! This means that the neighborhoods immediately adjacent to the downtown area are slowly but steadily becoming more urban in nature. In these areas, older buildings are being redeveloped into retail and service locations, or into apartments, or replaced altogether with newly-built homes and places of business.

Of course, one of the earliest neighborhoods to undergo this kind of change has been the River North Art District, or RiNo. Its proximity to the core downtown area, and the fact that it does have room for new development, has made the area ripe for change.

Now it’s the turn of SoBo, which is coming to new and vibrant life, as more and more people rediscover everything this part of the city has to offer, and as new businesses are drawn to the area in response to this increasing level of interest.

There’s Something Special about SoBo

SoBo has undergone something of an urban renewal in recent years. This is a process that is still ongoing, and which will likely continue to transform the face of the neighborhood for years to come. For those who are lucky enough—and smart enough—to buy property here now, living in SoBo is the ticket to easy access to a fantastic range of places to eat, shop, and be entertained!

The part of Denver that is now known as SoBo was overlooked for a long time. A stretch of mostly industrial buildings, lined on either side with 1920s and 1930s homes, and not much in the way of shopping or entertainment, meant that for most people, there was little reason to ever visit this part of the city. Apart from the Antique Row—a collection of around 100 antique and collector’s stores—there just wasn’t much there.

For a variety of reasons, that’s all started to change in recent years. One important driver of all this change has been, surprisingly enough, the legalization of marijuana in Colorado, first for medicinal purposes and then later for recreational use. As a result of these law changes, a number of dispensaries opened up in Denver, and it just so happened that most of them set up shop on South Broadway. In fact, there are now more than 15 legal dispensaries along Antique Row—for which reason the area is known to some as The Green Mile.   Find Marijuana Friendly Homes

Another contributing factor is just what happens in all older, less fashionable neighborhoods: the price of entry is lower. Reduced real estate rentals and purchase prices made it easier for new businesses to gain a foothold in the area. As a result, slowly but surely, a wide variety of new retail and other locations opened up. Microbreweries, restaurants, entertainment venues, and art galleries began to filter into the neighborhood alongside the antique stores and dispensaries, adding to the already changing vibe of the area.

Now, as the area is undergoing a process of renewal, more and more new businesses are coming to join the party. Thanks to the proximity of the nearby light rail system there’s easy access to public transport, and with a couple of large sites nearby under development, there’s a lot happening here.

One of these new sites is what used to be the Gates Rubber Factory, which lay vacant and dilapidated for over 10 years after shutting down in 2001. Finally demolished in 2014, the site has been cleaned and leveled, and is now set for a 40-acre transit-oriented development, with thousands of apartments, already named Broadway Station.

Then there’s the former Shattuck Chemical Company, a radium refinery that, after closing more than 30 years ago, left behind what turned out to be an environmental disaster. Set on 6 acres of land, and a former EPA Superfund site, the now-clean land is under contract to a developer. Now there are plans to turn the former brownfield into a residential development called Encore Evans Station, with over 200 apartments as well as essential amenities.

With all of this going on, it’s all but guaranteed that SoBo will only continue to flourish. A wide range of entertainment, shopping, and dining opportunities, along with a mixture of both old and new homes, means there’s loads of potential for SoBo to become a highly desirable place to live and enjoy life.

SoBo is definitely one of the most interesting, thriving, and ever-changing Denver neighborhoods, and the homes here are poised to become some of the most in-demand in the entire city. Are you hoping to buy property in the SoBo area, or wanting to sell a SoBo home? Kenna Real Estate is located right in the heart of SoBo, and we’re definitely the SoBo property experts to call! Our experienced realtors are just as knowledgeable about Englewood and the rest of Denver, too!

Whether you’re buying or selling property in Denver, we’re the people you want to talk to. Call Kenna Real Estate at 303-955-4220 today, or use the contact form on our website, and let’s get started on fulfilling your real estate dreams.

Classic SoBo Victorian located in the heart of South Broadway. Zoned U-TU-C, and sitting on a 6250sqft corner lot, this 3 bedroom, 1 bath home provides opportunities for ...

This South Broadway home is close to all the action while also giving you a double lot to enjoy your own space while at home. A fully permitted renovation about 10 years ...

This is your opportunity to own an impeccably maintained home in the coveted Platt Park neighborhood. Situated on a rare double lot, this home retains its Victorian charm...

DOUBLE LOT - UPDATED - STORAGE - LOCATION This is your opportunity to own an impeccably maintained home in the coveted Platt Park neighborhood. Situated on a rare double ...

Tons of character and charm in this 1890 Victorian. They just don't build them like this anymore. Tall 10 foot ceilings. Original operable pocket doors. Updated maple c...

The real estate listing information and related content displayed on this site is provided exclusively for consumers' personal, non-commercial use and may not be used for any purpose other than to identify prospective properties consumers may be interested in purchasing. This information and related content is deemed reliable but is not guaranteed accurate by the Pikes Peak REALTOR® Services Corp.

The content relating to real estate for sale in this Web site comes in part from the Internet Data eXchange (“IDX”) program of METROLIST, INC., DBA RECOLORADO® Real estate listings held by brokers other than Real Estate Company are marked with the IDX Logo. This information is being provided for the consumers’ personal, non-commercial use and may not be used for any other purpose. All information subject to change and should be independently verified. IDX Terms and Conditions

The data relating to real estate for sale on this web site comes in part from Information and Real Estate Services, LLC under IRES Rules © Copyright IRES, and is provided for limited non-commercial use. Information is provided exclusively for consumers' personal use and may not be used for any purpose other than to identify prospective properties consumers may be interested in purchasing. Real estate listings held by other brokerage firms are included in this site and detailed information about them includes the name of the listing brokers. Listing broker has attempted to offer accurate data, but buyers are advised to confirm all items.
Information deemed reliable but not guaranteed by the MLS
Listing data last updated: 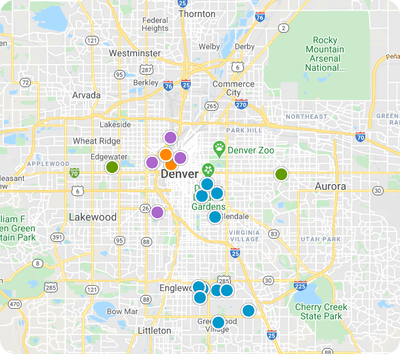